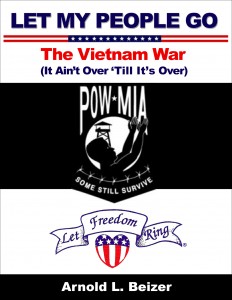 Arnold L. Beizer’s terrific new book entitled
“LET MY PEOPLE GO ” will shock and amaze you. There are still American servicemen alive in Vietnam and Laos long after the Vietnam War was declared over. These prisoners have been abandoned and forgotten by their government and by WE THE PEOPLE. The proof, hidden in the pages of the Bible for ages has been miraculously concealed until now when it has been decoded by Attorney Arnold L. Beizer, President of Let Freedom Ring, Inc. The plain Truth is there for all to see. The facts can now be revealed.

The Bible Code establishes supernaturally and unequivocally that Major Albro Lundy and Colonel David Hrdlicka , American pilots who served in the Vietnam War, and who were both shot down in the undeclared war over Laos were captured and held prisoner in prison caves of Laos in Southeast Asia. They were hidden and may still be alive waiting with other servicemen for their fellow Americans to release them from their imprisonment. They were abandoned by their government and left for dead. I am hopeful they will soon be among those set free from the bondage they have long endured. Their cry for freedom, “Forget-Me-Not“, has been recorded for all times in the pages of the Bible. I believe that the Lord has confirmed their plight at this time and in this way, so that no American President, Senator or Congressman will ever again say, there is “NO CONFIRMATION” that there are any POWs/MIAs still alive or being held captive in Southeast Asia. The Bird (Avian) Flu is an epidemic that will beset the enemies of God and of God’s People until such time as the captors heed His command to: “LET MY PEOPLE GO!”

All of the above highlighted and underlined search terms can be found encoded with Bible Code Equidistant Letter Spacing (ELS) skip codes in the Book of Exodus particularly in chapters 14, 15 and 16 that was written by Moses and inspired by the true Author of the Bible, non other than the God in whom We Trust. The Book of Exodus has as its central theme freedom from bondage and the setting of the captives free. The most astonishing revelation of all to be found in the pages of Arnold L. Beizer’s bible code research book is that the BIRD FLU is actually a Divine form of punishment brought upon the people of S.E. Asia (where the Avian Flu outbreak began) for refusing to “LET MY PEOPLE GO.”